As I mentioned in my last service a couple of weeks ago before I had some well-earned time off. I thought I would put well-earned in there just in case you forgot to say so. Celebrations have continued to take place during these times of Covid social distancing measures. They have looked very different and the attendee numbers have been remarkably lower than normal. This morning in St Michael’s we should have been hosting the HTA Kirkin Service for the Honest Lad and Honest Lass. As we all know it is a big date in the Church’s calendar and our community’s.

Like so many events across the land it was not possible to hold the service but as many organisations, and not least the church have done, the use of technology has in some measure saved the day and allowed the occasion to be marked in the best way possible under current circumstances. The HTA Committee have been very busy putting together a virtual wreath laying ceremony at the War Memorial in Inveresk.

This morning the 50th year Honest Lad and Honest lass were filmed laying the wreath. People have been filmed at different locations and at different times over the last two weeks and then the whole lot will be pulled together and edited to go out on the internet today sometime. I was filmed on Tuesday afternoon in the Manse garden addressing, virtually, the 50th year Honest Lad George Cunningham and the 50th year Honest Lass Morag Sharp. I based what I had to say around our reading from Exodus. When George and Morag became Honest Lad and Honest Lass in 1970 the Commonwealth Games were taking place a stones throw away in Edinburgh. In 1995 when they were the 25th year Lad and Lass it was the year of the Riding of the Marches. In 2020 they are now the 50th year Lad and Lass we are in the middle of this pandemic.

Proof, if ever it was need, nobody knows what tomorrow will bring far less what will be going on in 25 years time. Watch the Virtual Kirkin HERE

This Exodus from Egypt took place some 1500 years BC and it lasted for some forty years.

The Bible is full of people, both men and women, who are called to go and speak on behalf of their people, to represent their community. Moses may well be amongst the most famous and well-known name as there have been countless adaptations of his story captured on the silver screen. The book of Exodus is a book of journeying.

Moses is a man who is called forward to represent his people, to put forward their case, to speak on their behalf.

Then together they go on this amazing journey that will undoubtedly have twists and turns. It will be a journey when people will question why they are on it, people will wish they had never even taken the first step into that great unknown which is tomorrow. Then of course there are those who cannot see where God is in this whole episode of the history of their people. We have the recorded accounts in the book but the people we read about where living through these times without the privilege of being able to fast forward to the last page and finding out how it all ultimately comes to an end, there was nobody who could do a spoiler alert . During this time that we find ourselves in it seems that every day we hear the phrases ‘well according to the route map we should be doing A, B or C next….or ‘sticking to the route map is our best way forward’.

They have Moses who had for forty years humbly shepherded sheep. He did not know that morning what lay in store for him and the rest of his life. He did not know that morning he would meet with God and be called to lead the people forth out of bondage. This burning bush experience is the commissioning of Moses. It marks what can only be described as the greatest adventure of a lifetime and it would take a lifetime to complete. Stop and think for a moment the magnitude of what is happening here. God is beginning a mission of deliverance and redemption. How amazing that he chooses humans to act as the instruments to carry out this mission. We are to be part of this great adventure story and journey that will lead us to our own burning bush experience of encountering God.

If you know anything of the Exodus story then you will know the trials and tribulations that the people went through. You will know the uncertainties that they faced. You will know how they questioned if God was with them and if so how, where and when. When it appeared they were doomed as they stood on the shores of the Red Sea asking why have you led us here. Before God parted the waters and they crossed over safely. You will know God supplied them with manna from heaven. Not just once or twice, not just weekly or monthly. God gave new and fresh each day with the people taking only what they needed for that day then on the sixth day twice as much would be provided to allow for their day of rest, their Sabbath Day. Moses began his conversation with God in a way that suggests he has his own doubts about his abilities to lead when he asks, ‘Who, me’ At the start of the next chapter he fears that he has a lack of authority ‘What if they don’t believe me?’

Verse 10 he fears his lack of communication skills, ‘I am slow of speech and tongue.’ And then in verse 13 he shows that his fear is complete, ‘please send someone else.’

Read on, read on, I say. For if you do you will discover that all of us who have experienced these emotions of similar self-doubts will be delighted to discover cause for great hope. From this fumbling, bumbling beginning we trace the emergence of one of the Biblical greats. A man filled by God making decisions that alter the way of life for his people and for generations who follow even and including the generation of which we are part. 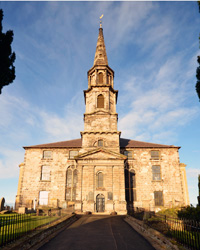 See our calendar for details.